It was perfect timing.

The Grande Prairie Pride Society became a GPRTA member at the start of June, just in time for Pride month activities.

Pride Society President Erica Fisher says signing on with the tourism association is a great opportunity to build on its local success and open the doors for more people across the region to get involved.

“We’d love to see people from across the Peace Country take part in our events as well as to support their own Pride events in return. We believe that by collaborating with the GPRTA and its partners, we’ll be able to extend our reach even further and make our events a part of the city’s tourism landscape.”

For its part, GPRTA has joined the GP Pride Society as Friends of Pride.

“Our mandate is largely to host events that celebrate Pride in our community and across Northern Alberta,” notes Fisher.

“Increasing visibility has been a primary focus of the past couple of years and we continue to see increased acceptance and support of our cause. The partnerships we can make with GPRTA and its members and associates can help in that goal.”

“We want to work with more businesses and organizations on their diversity and inclusion goals, as well as to highlight the efforts they’re already making. In turn, we hope we can see their support as well.” 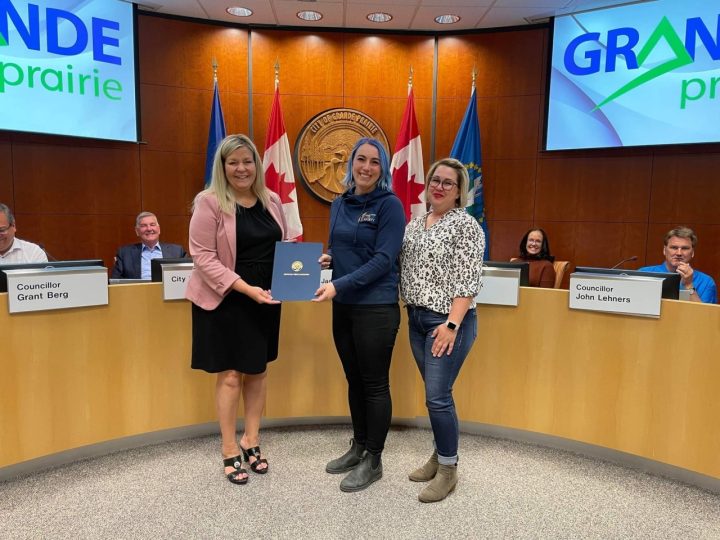 Pride 2022 was the largest to date, starting with the sixth annual rainbow crosswalk painting on 98th Street between City Hall and the Montrose Cultural Centre on June 9. This activity has grown to include a barbecue and games in a celebration open to the community.

Overall, the slate of events was designed to connect with families and all ages.

“Those attending had an opportunity to be themselves with their peers, enjoying pizza and mocktails, and a drag performance by two queens from RuPaul’s Drag Race. The entire event was free in an effort to remove as many barriers as possible,” says Fisher.

On June 11, the Pride Family Carnival, another free event, attracted thousands of visitors throughout the day. It included bouncy castles, face painting, carnival performers, and a pancake breakfast, as well as the community alley, showcasing an array of non-profit organizations.

The Party in White, an event for 440 people that sold out in early 2020, featured performances by four drag queens from RuPaul’s drag race, a catered dinner, a dance, and a VIP meet and greet. When this event was last held, 175 attended.

Pride events held by the community included Beers for Queers and Pound for Pride.

The Pride Society is not resting on its success.

“We’re already making plans for 2023,” says Fisher. “In addition to what we’re already doing, our goals as an organization include planning more, smaller events throughout the year, working on releasing an LGBTQ+ resource guide with our community partners, and to create greater connections with local school divisions and businesses.”

In addition to the nine-member board, the society has a large contingent of volunteers and a diverse array of community sponsors to support events.

The Grande Prairie Pride Society created its Friends of Pride membership in 2020 as a way to show broader support in the community and to involve more individuals and small businesses.

“We want to continue increasing our membership and to be able to offer more to our members, like workplace training, in the future,” says Fisher.

“The Grande Prairie Pride Society has seen incredible support from the community since its inception in 2015/2016,” says Fisher.

That broad level of support is important and is also reflected in the growing attendance at events, interactions on social media channels and referrals.

This year’s Pride event being the largest ever was especially pleasing to the society as it was undertaken without the provincial grant it previously accessed.

“The Grande Prairie Pride Society feels privileged to have so much personal and professional support,” says Fisher.

“Every year, it’s clear that love is winning in our community. We look forward to becoming a stronger tourism draw and a beacon of acceptance in the Peace Country.”